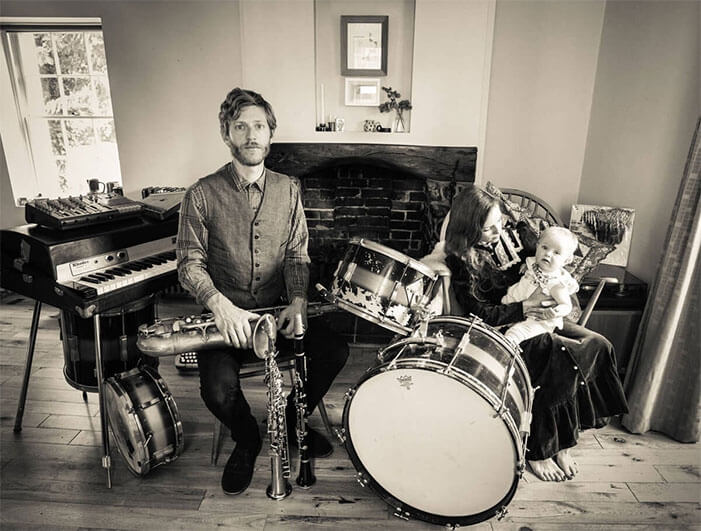 Stillman communicates through layered jazz arrangements, playing most of the instruments himself but conjuring the sound of a full ensemble—one with the ability to mystify, dazzle, and soothe with every twist. PITCHFORK

“Stillman sounds as if he’s drawing on a deep reserve of sacred conviction.” AQUARIUM DRUNKARD

“Stillman is a composer with an innovative way of rethinking a creaky, generally neglected strain of Americana” UNCUT

“Stillman exhibits an enviable aptitude for quiet experimentation in his compositions, testing boundaries and taking subtle chances without alienating his audience.” DUSTED

Robert Stillman is a composer and multi-instrumentalist from the northeast United States, currently based in Margate, UK. His music juxtaposes the archaic with the futuristic, incorporating influences of Jazz, Minimalism, American Folk music, and experimental electronic music to create a sound described by the Guardian Observer as “lending an avant-garde shimmer to pre-modern American sounds.”

Stillman’s music takes the form of studio recordings (8 under his name), multi-media installations, and experimental radio broadcasts.  His music has received praise from the Wire, Mojo, Aquarium Drunkard, Uncut, and Other Music, and has been broadcast on BBC Radio 3, BBC Radio 2, NTS, Worldwide FM, and WFMU, and included on playlists curated by Thom Yorke, Gilles Peterson, M.C. Taylor (Hiss Golden Messenger), Bandcamp (Bandcamp New and Notable), and Norman Records.

He has performed his music at venues and festivals throughout the North America and Europe, both as a solo act, and ensembles of various instrumentations, supporting artists such as The Smile (Radiohead’s Thom Yorke and Jonny Greenwood and Sons of Kemet’s Tom Skinner), Deerhoof, Hauschka, Yo La Tengo, Dirty Projectors, and Casiotone for the Painfully Alone/Advance Base.

In addition to his own music, he currently plays with Tom Skinner (Voices of Bishara),  and Dave Okumu. He has also collaborated with acts such as Grizzly Bear, Ghost Poet, Luke Temple (Here We Go Magic), Hiss Golden Messenger, Kit Downes, and Adem Ilhan. He is also part of the collaborative band Bog Bodies with drummer Sean Carprio and guitarist Anders Holst.

His recordings are released by Orindal Records (USA) and Kit Records (UK/EU), and he is published by Mute Song.

“Like the celestial phenomena of its title, the power of Rainbow is in Stillman’s ability to bridge the album’s weather-beaten foundations with elegant surges of brightness and colour. A remarkable achievement. ★★★★” MOJO

“An arcane and lovely piece of work…Stillman is a composer with an innovative way of rethinking a creaky, generally neglected strain of Americana” ★★★★ AQUARIUM DRUNKARD

“The US composer and multi-instrumentalist presents a brass-and-percussion requiem for John Fahey, which marches, staggers, waltzes, and floats with a euphoric, drunken dignity.” (★★★★) MOJO

“(Station Wagon Interior Perspective) is a tibute to guitar soil master by another American londer-visionary… Stillman has been chipping away at an ornery, creaky vision of American 20th-Century fantasia, taking in the drunken lurch of late-night big band, the irrepressible freedoms of Charlie Haden’s Liberation Music Orchestra, and the visionary freedom of outsiders like Charles Ives and Harry Partch (8/10)” UNCUT

“Stillman takes over-familiar totems of Americana asks you to hear them afresh.” THE GUARDIAN OBSERVER

“Machine’s Song is a creaky, uncanny music that creates an impressionistic ‬picture of old America” – UNCUT

“Listening to Robert Stillman’s extraordinary Machine’s Song is akin to stepping inside some half remembered dreamworld inhabited by fairground organs, player pianos and other antique musical automata.” – SHINDIG’S HAPPENING MAGAZINE

“It’s beautiful music that engages both the emotions and the intellect, and seems to exist at least partly in the shadows of memory, which is, perhaps, a bit part of what makes it such a rousing delight.” – THE HURST REVIEW‬

“At its foundation, Stillman’s work evokes images of bar brawls, oncoming trains, and wild gesticulations, but the loving romanticism of his narratives is infused with experimental touches that both examine and repurpose the legacy of early American music.” – THE PORTLAND PHOENIX‬

“Wonderfully sympathetic music that has the feel of Glass or Reich, whilst retaining an organic warmth.” – THE THE TERRASCOPE‬